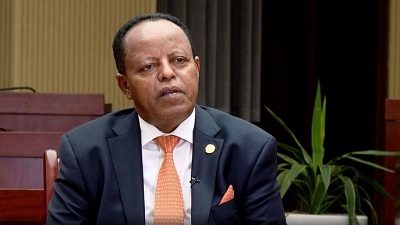 Ethiopia has managed to overcome challenging times through the concerted efforts of diplomacy and support of friendly countries, Taye Atseke Selassie, Ambassador.

Ethiopia has managed to overcome challenging times through the concerted efforts of diplomacy and support of friendly countries, Taye Atseke Selassie, Ambassador.

In an exclusive interview with ENA, the ambassador said the past two years were very difficult for Ethiopia due to an internal conflict that has happened completely unexpected.

Ambassador Taye noted that it has been a very challenging time for Ethiopia, but through diligent work and perseverance we were able to overcome the challenges.

“I would say that it has been a challenging time, but it was something we are able to overcome with concerted efforts, and also of course the support of our people and many African countries and other countries who strongly believe this is an internal matter that should be in the first place solved by Ethiopians themselves.”

Some institution leaders had the audacity to tell us that we Ethiopian will not be able to solve our challenge. But over the years we have seen that this is completely wrong, Taye pointed out.

“Even though we had passed through difficult times, we showed the world that we have the wisdom, the understanding and the resilience and commitment to resolve our problems. We passed through very difficult period. But at the end of the day, our country has prevailed and our people have triumphed,” Taye noted.

Though the conflict in the northern part of the country was internal issue, they took the case directly to the UN Security Council, which required a lot of efforts to dispel the misunderstanding and explain our right cause as well as defend the survival integrity of Ethiopia, he added.

“We thought that this would be seen as an issue that could be handled internally, but unfortunately the issue has been internationalized, and we were compelled to defend this at the international arena, ” Ambassador Taye noted.

That made our efforts, particularly in the diplomatic area, require a lot of efforts to explain in the first cases why we have to defend sovereignty and territorial integrity of Ethiopia, he pointed out.

The ambassador stated that some members of international community had this understanding and comprehension that the conflict will definitely spillover to other countries and will also create crisis in the Ethiopian body politics.

Ambassador Taye further indicated the reform over the past four years gave the indication and understanding that whatever the difference we Ethiopian have, they could be solved in a civilized political discourse.

Regarding the current progress of bilateral relationships, he said we have a strong relationship with many countries, despite the past misunderstandings and also probably in some corner misrepresentation of facts.

Since there is a good will from our side and good measure of understanding from the international community over the years, the ambassador pointed out that he believes the country can sustain the gain of the Ethiopian people through cooperation, different mechanisms and particularly by reinstating relationship at a bilateral level with various countries.