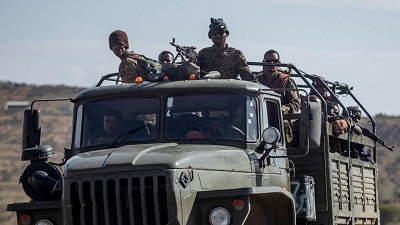 Fighting erupted between government forces and Tigrayan rebels in northern Ethiopia on Wednesday, shattering a five-month truce and dealing a blow to peace efforts.

Fighting erupted between government forces and Tigrayan rebels in northern Ethiopia on Wednesday, shattering a five-month truce and dealing a blow to peace efforts.

Reports of fresh offensives were followed by Ethiopia's air force announcing it had downed a plane carrying weapons for the Tigray People's Liberation Front (TPLF).

The government of Prime Minister Abiy Ahmed and the rebels have accused each other of undermining efforts to peacefully resolve the brutal 21-month war in Africa's second most populous nation, and traded blame over who was responsible for returning to combat.

UN chief Antonio Guterres said he was "deeply shocked" by the renewed fighting and appealed for an "immediate cessation of hostilities and for the resumption of peace talks".

The head of the African Union Commission, Moussa Faki Mahamat, called for a "de-escalation" and the resumption of "talks to seek a peaceful solution".

The United States urged both sides "to redouble efforts to advance talks to achieve a durable ceasefire", a US State Department spokesman said.

The TPLF said government forces and their allies had launched a "large scale" offensive towards southern Tigray early Wednesday after a months-long lull in fighting.

But the government accused the TPLF of striking first and violating the ceasefire.

"Ignoring all of the peace alternatives presented by the government, the terrorist group TPLF armed group continued its recent provocations and launched an attack this morning at 5 am (0200 GMT)" around southern Tigray, the Government Communication Service said in a statement.

The rival claims could not be independently verified as access to northern Ethiopia is restricted, but there were reports of fighting around southern Tigray in areas bordering the Amhara and Afar regions.

"They launched the offensive early this morning around 5 am local time. We are defending our positions," TPLF spokesman Getachew Reda told AFP.

He said on Twitter that the "large-scale" offensive was launched "against our positions in the southern front" by the Ethiopian army and special forces as well as militias from neighbouring Amhara.

The air force said Wednesday it had shot down a plane "believed to be a property of historical enemies who want Ethiopia's weakness".

"The airplane which violated our airspace from Sudan... and aimed to supply weapons to the terror group was shot down by our heroic air force," the Ethiopian News Agency quoted armed forces spokesman Major General Tesfaye Ayalew as saying.

The date of the incident, the type of aircraft and how it was downed were not detailed.

The TPLF said it was a "blatant lie".

The March truce had paused fighting in a war that first began in November 2020, allowing a resumption of some international aid to Tigray after a three-month break.

Both sides in recent weeks had evoked possible peace talks.

But they disagree on who should lead negotiations, and the TPLF also insists basic services must be restored to Tigray's six million people before dialogue can begin.

Abiy's government says any talks must be brokered by the African Union's Horn of Africa envoy Olusegun Obasanjo, who is leading the international push for peace, but the rebels want outgoing Kenyan President Uhuru Kenyatta to mediate.

In a statement dated August 23, TPLF leader Debretsion Gebremichael said "two rounds of confidential face-to-face" meetings with top civilian and military officials had taken place, the first acknowledgement by either side of direct talks.

No time or place was given for these talks, which the government has not confirmed.

"This serious breach of the truce agreed earlier this year demonstrates the need for the two parties to arrange unconditional face-to-face negotiations as soon as these hostilities cease," Davison said in a statement.

"I was shocked when I heard the news this morning. We had hoped they were ready for peace, but now our hope is gone," said Addis Ababa resident Teklehaimanot Mezgebu.

"If they start the war, that will not be good for the people of Ethiopia and Tigray."

The conflict has killed untold numbers, with widespread reports of atrocities including mass killings and sexual violence.

Millions of people need humanitarian assistance in Tigray, the country's northernmost region, as well as Afar and Amhara.

The UN's World Food Programme said last week that nearly half the population in Tigray is suffering from a severe lack of food and rates of malnutrition had "skyrocketed".

Tigray is largely cut off from the rest of Ethiopia, without basic services such as electricity, communications and banking.

Abiy sent troops into Tigray in November 2020 to topple the TPLF after months of tensions with the party that had dominated Ethiopian politics for three decades.

The TPLF mounted a comeback, recapturing Tigray and expanding into Afar and Amhara, before the war reached a stalemate.

Last Wednesday, an Ethiopian government committee tasked with looking into negotiations called for a formal ceasefire as part of a proposal it planned to submit to the AU.