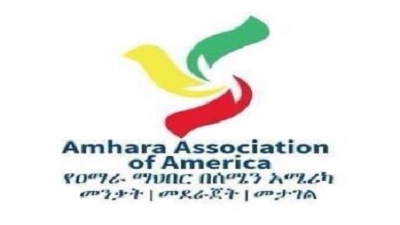 The Amhara Association of America (AAA) strongly condemns the June 18, 2022, massacre of hundreds of Amhara civilians by the Oromo Liberation Army (OLA) in West Wollega Zone, Oromia Region, Ethiopia; with complicity and reported direct involvement of government security forces. While the effort to locate and bury the bodies of victims is still ongoing, our sources confirmed at least 378 Amharas were killed and estimate the total to be more than 600 people.

The Amhara Association of America (AAA) strongly condemns the June 18, 2022, massacre of hundreds of Amhara civilians by the Oromo Liberation Army (OLA) in West Wollega Zone, Oromia Region, Ethiopia; with complicity and reported direct involvement of government security forces. While the effort to locate and bury the bodies of victims is still ongoing, our sources confirmed at least 378 Amharas were killed and estimate the total to be more than 600 people.

Massacres against Amharas have been ongoing since the divisive ethnic federal “apartheid” system that minoritized Amharas in many regions was introduced in the early 1990’s. Since Prime Minister Abiy Ahmed Ali came to power and allowed the OLA to return to Ethiopia armed with a base to recruit and train, the intensity and scale of massacres against Amharas by the OLA with the support of the Oromia Regional Government [Oromo Prosperity Party (OPP)] and security forces [Oromia Special Forces (OSF)] has increased. AAA recorded at least 1,688 killings and 62 abductions in 2021 by the OLA alone. In the same year, OSF was responsible for killing at least 37 Amharas and supporting OLA forces in some instances. Oromia Regional President Shimelis Abdisa never acknowledged the recurrent massacres of Amharas in the region he is leading, signaling that ethnic cleansing of Amharas is a regional policy.

This recent massacre by the OLA is occurring in parallel to the massive crackdown dubbed “law enforcement operation” against Amharas by Prime Minister Abiy Ahmed, his OPP, and the Amhara Regional Government [Amhara Prosperity Party (APP)] where the government admitted to the arrest of over 12,000 Amharas since mid-May 2022. Those arrested include over 20 journalists, 62 opposition political party members, lawyers, university professors, and current/ex-government officials who were critical of the Abiy administration. Military officials, officers, and Fano veterans were also prime targets. In several instances, family members of targets were also abducted in order to lure out the targets. Over 30 peaceful protesters were killed by security forces in May 2022 during the crackdown.

Unfortunately, the ongoing massacres and repression of Amharas has been normalized under Prime Minister Abiy Ahmed’s administration. International human rights organizations and governments across the globe have sadly remained silent on the recurrent massacres against Amharas and hence little pressure has been exerted on the Ethiopian Government to end the ongoing Amhara Genocide. In their silence and refusal to demand action, Amhara members of Prosperity Party continue to be complicit in enabling a state-sanctioned genocide against Amharas.

The Ethiopian Federal Government, APP, and OPP must stop deflecting blame and accountability and fulfill the basic requirements of a government to protect civilians and hold perpetrators of atrocities accountable. The lawlessness and loss of innocent lives in the so-called “Oromia Region” should be unacceptable to all Ethiopians. Amharas can no longer sit and watch non-action by Ethiopian authorities and international organizations as their family members are slaughtered by extremist actors such as OLA who have no political stances other than eliminating Amharas from areas they claim or managed to control. Amharas also have no reason to depend on a government that refuses even to recognize the killings of Amharas let alone try to undertake its basic responsibilities of protecting Amharas and bringing justice to survivors and victims.

These attacks have persisted for several years without any meaningful action by government officials to stop the bloodshed. Failure to act by the international community and Ethiopian Government at this critical juncture is tantamount to continuing the practice of normalizing violence against Amharas. AAA, its supporters, and the broader Amhara community in the diaspora call for:

1.      Prime Minister Abiy Ahmed Ali and Oromia Regional President Shimelis Abdisa to resign and/or be removed for negligence, complicity, and/or direct involvement in the state-sanctioned Amhara Genocide in Ethiopia and allow independent investigation on the recurrent genocidal acts and ethnic cleansing in the so-called “Oromia Region” and recent war crimes committed by the TPLF.

2.      Federal parliament declare a nation-wide day of mourning to denounce the recurrent massacre of Amharas in Oromia Region and other parts of Ethiopia and set up an independent commission to document and redress the injustices done to the Amhara people by the former TPLF-led EPRDF (Ethiopian People’s Revolutionary Democratic Front), the current Prosperity Party government and in the context of the ongoing civil war crimes committed by the TPLF.

3.      The UN, in collaboration with relevant human rights organizations, to establish a body to investigate the massacres with a clear road map to ensure accountability and transitional justice for those affected.

4.      National and international humanitarian actors to step up aid to survivors and those displaced fearing similar attacks.

5.      Governments across the globe to denounce the genocidal acts against Amharas by the OLA, TPLF, and Prosperity Party and to implement targeted sanctions against its leaders and financers.

6.      All Ethiopians to join Amharas in pushing for efforts to hold all actors who helped, enabled, and participated in the ongoing Amhara Genocide accountable including leaders of the APP.

“This latest genocidal massacre by the OLA in West Wollega under the leadership of Prime Minister Abiy Ahmed and Oromia Regional President Shimelis Abdisa is sickening and is an attempt to normalize the state-sanctioned genocide against Amharas” said Tewodrose Tirfe, Chairman of AAA.

“Amharas are asking for the international community to denounce this senseless violence, demand independent investigation, and stand with the Amhara people.” Tirfe continued.

Amhara Association of America  This email address is being protected from spambots. You need JavaScript enabled to view it.  About AAA: The Amhara Association of America (AAA) is a nonprofit organization that coordinates the advocacy efforts of Ethiopia’s Amhara diaspora in the United States to Congress, the Executive Branch, nongovernmental organizations, and international bodies. Visit www.amharaamerica.org for more information.  ”