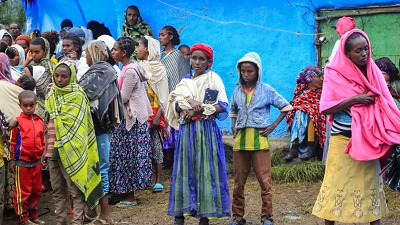 The human rights and humanitarian situation in Ethiopia deteriorated further in 2021, with civilians impacted by a devastating conflict in Tigray, security force abuses, attacks by armed groups, and deadly ethnic violence in other regions.

Displaced Amharas from different villages gather in a kindergarten school housing the internally-displaced, in Debark, in the Amhara region of northern Ethiopia. (Photo: AP)

The human rights and humanitarian situation in Ethiopia deteriorated further in 2021, with civilians impacted by a devastating conflict in Tigray, security force abuses, attacks by armed groups, and deadly ethnic violence in other regions.

The government’s actions in Tigray contributed to growing international pressure to address accountability for rights abuses.

In Tigray, government forces and allies committed forcible displacement, large-scale massacres, widespread sexual violence, indiscriminate shelling, pillage, and attacks on schools and hospitals. By mid-year, these abuses had left an estimated 350,000 people facing starvation. After government forces withdrew from many parts of Tigray in late June, it imposed an effective siege on Tigray, blocking virtually all humanitarian aid from reaching the region, violating international humanitarian law and possibly committing the war crime of using starvation as a weapon of war. The conflict spread into the Amhara and Afar regions resulting in large-scale displacement. Tigrayan forces were also implicated in serious abuses against Amhara civilians.

Elections took place in an environment marred by restrictions on free expression and association, and insecurity in several regions. In June, the ruling political party was re-elected for a five-year term.

Accountability for past and present abuses remained minimal. In Tigray, the prime minister admitted forces engaged in looting and sexual violence, but downplayed the severity of abuses. For months, the government denied the presence of Eritrean forces and resisted international investigations. A joint investigation into abuses in Tigray by the state-appointed Ethiopian Human Rights Commission and the United Nations Office of the High Commissioner for Human Rights (OHCHR) concluded that there have been widespread violations of international human rights, humanitarian and refugee law by all parties to the conflict in Tigray, some of which may amount to international crimes, in particular, war crimes and crimes against humanity.
Tigray Conflict

In January, Ethiopian and Eritrean forces rounded up and executed dozens of unarmed men after attacking several villages surrounding Mahbere Dego, in central Tigray. On March 23, Ethiopian soldiers forced passengers off a public bus in northeastern Tigray, separated the men from the women, and executed at least four men. On June 22 a government airstrike hit a market in Togogo central Tigray, reportedly killing at least 51 people and injuring scores. Government strikes in Tigray continued in October.

Ethiopian authorities blocked roads into the region and only allowed sporadic humanitarian access. The destruction and pillage of health facilities prevented survivors of conflict-related sexual violence from accessing health services.

On June 28, after the defeat of Ethiopian government forces in Tigray, Ethiopian authorities declared a unilateral ceasefire. Retreating Ethiopian soldiers raided UNICEF and WFP offices in the regional capital, Mekelle, and looted communications equipment. Since then, the government has imposed what the UN has called a de facto blockade on Tigray. Electricity and fuel supplies reached dangerous lows in September, communications and banking remained shut, and access to cash was severely limited.

The conflict expanded into the neighboring Amhara and Afar regions in July, displacing hundreds of thousands. Tigrayan forces summarily executed Amhara civilians and were implicated in the pillage of civilian property. On August 5 in Galikoma, Afar, dozens of civilians were reportedly killed and injured near a school and health facility. In the Amhara region, fighting between Tigrayan forces and Ethiopian and allied forces intensified. In August and September, Tigrayan fighters summarily executed Amhara residents in Chenna and Kobo, and committed rape, including gang rape in Nifas Mewcha.

In Oromia, reports of arrests, detention, and summary executions of Oromo civilians accused of supporting the armed rebel group, the Oromo Liberation Army (OLA), continued. In May, security forces in Dembi Dollo, western Oromia, violently apprehended a 17-year-old boy and then summarily executing him in public.

Armed groups carried out attacks against officials, police, and civilians, including killings and lootings in western Oromia. In late March, OLA rebels reportedly killed at least 28 Amhara civilians and injured over a dozen in Babo Gembel West Wellega zone.

Tensions over political and land administration in Benishangul-Gumuz, fuelled violence, with summary executions of Amharas and other ethnic groups by armed militias, particularly in Metekel zone, escalating.

Conflict between Afar and Somali communities over disputed boundaries intensified with the reported involvement of regional armed forces on both sides, killing hundreds in March and July and displacing thousands.
Elections and Political Space

Ethiopia’s sixth national elections were held in two stages, after two initial postponements. The first on June 21, was held in most electoral constituencies; the second in the Somali and Harari regions on September 30 after reported voting irregularities, and in 12 constituencies in the Southern Nations, Nationalities, and People’s (SNNPR) region. Voting did not take place in Tigray, nor in parts of Oromia, Amhara, Afar, and Benishangul-Gumuz regions due to insecurity.

More parties and candidates competed than in the past, and internally displaced persons IDPs were able to cast their vote in some areas, but the pre-electoral period was marred by violence and insecurity in several regions and accusations by opposition parties of a repressive operating environment.

Two opposition candidates, Girma Moges of EZEMA and Berihun Asferaw of NAMA, were assassinated in Oromia and Benishangul-Gumuz region in February and April.

In Oromia, the country’s biggest regional constituency, the ruling Prosperity Party ran unopposed, after the main opposition parties, the Oromo Federalist Congress (OFC) and the Oromo Liberation Front (OLF), boycotted the election, citing intimidation of supporters and the detention of party leaders.

In the Somali region, on September 17, the Ogaden National Liberation Front (ONLF) withdrew from the elections alleging attacks on candidates and members and blocks on registration.

The incumbent party faced stiff competition in the Amhara region, but opposition parties submitted several complaints to the National Election Board alleging voter and observer intimidation by local officials and militias.
Due Process Rights and Fair Trial

On January 27, Ethiopian authorities arrested dozens of supporters of detained Oromo politicians in Addis Ababa outside a court hearing. Twenty senior Oromo political detainees began a hunger strike in protest. Oromo politician Bekele Gerba’s health worsened. In February, authorities defied a court clearance to transfer him to a private hospital, forcibly took him to an army hospital, and briefly detained his doctor.

On February 14, security forces arrested Oromo Mohammed Deksisso, a graduating student in Jimma, after calling for the release of Oromo politicians and justice for murdered Oromo singer Hachalu Hundessa. Mohammed was held for five months, faced serious due process violations before his release.
Freedom of Expression, Media, and Association

Government attacks and restrictions on the media and free expression increased.

Journalists and outspoken public figures reporting or critiquing rights abuses linked to the Tigray conflict faced intimidation, expulsion from the country, and arrest. On July 15, Ethiopia Media Authority temporarily suspended Addis Standard, a leading news outlet in Ethiopia “claiming it was advancing the agenda of the TPLF.”

In March, Ethiopian security forces briefly detained three media workers and one journalist in Tigray in a military camp. In early July, police arrested 10 Awlo Media journalists and media workers and two EthioForum journalists; they were held incommunicado for weeks before their release in August.

On September 30, security forces arrested Abraha Desta, a former official in Ethiopia’s interim administration in Tigray, after he published an open letter denouncing arbitrary arrests and discrimination against ethnic Tigrayans in Addis Ababa.

Ethiopian authorities passed a nationwide state of emergency November 4, granting the government far-reaching powers that heighten the risks of arbitrary arrest and detention against at-risk communities, but could have a chilling effect on humanitarian activities, induce self-censorship by the media, activist groups, and human rights organizations, and risk emboldening abusive elements within the security forces.

The government maintained an internet shutdown in Tigray throughout the year. Telephone connections were sporadic through June when they were shut off again.
Refugees

Between November 2020 and January 2021, Eritrean forces and Tigrayan militia alternatively occupied Hitsats and Shimelba refugee camps in Tigray and committed killings, sexual violence, arbitrary detention, forcible disappearances, and looting against scores of the 20,000 Eritrean refugees living in these camps. In January, Eritrean forces destroyed large parts of the camps, which were empty of refugees by March. Fighting in mid-July in Mai Aini and Adi Harush, the region’s two other functioning camps, left Eritrean refugees in urgent need of protection and assistance.

Until August, Eritrean refugees fleeing to Addis Ababa from Tigray received no protection. Finally ARRA with UNHCR began issuing three-year temporary identification documents to Eritrean refugees who had relocated to Addis from Tigray, enabling them to access assistance and services.
Key International Actors

Ethiopia’s relations with some of its regional neighbors and donors significantly worsened, particularly over the conflict in Tigray. The UN Security Council’s ability to address the crisis was largely nullified by China, Russia, and India. Kenya, Niger, and Tunisia, in July called for a comprehensive ceasefire, humanitarian access, and expressed support for an inquiry led by the African Commission on Human and Peoples’ Rights (ACHPR). These calls did little to encourage substantive Security Council action.

The US repeatedly condemned the human rights abuses committed by warring parties in Tigray. In March, Secretary of State Antony Blinken characterized the Ethiopian government’s actions in Western Tigray as “ethnic cleansing.” On September 18, President Joe Biden issued an Executive Order that established a sanctions regime on individuals and entities responsible for human rights abuses in northern Ethiopia and for obstructing humanitarian aid.

On January 15, the European Union announced US$107 million and the UK committed £75 million in humanitarian assistance. The UK and EU leadership repeatedly condemned abuses. The EU urged member states to consider imposing “restrictive measures” on Ethiopia. In May, the EU withdrew its elections observers, citing a failure to agree with the government, including over its ability to operate independently. On October 4, the European Parliament adopted a resolution urging sanctions against those responsible for abuses and for obstructing humanitarian aid, for an arms embargo, and for a robust international investigative mechanism. On October 18, EU foreign ministers agreed to prepare ground for targeted sanctions on Ethiopia.

The AU remained the only international body to monitor the June elections and declared them to be “credible,” despite irregularities and insecurity in several regions.

In November, the Office of the UN High Commissioner for Human Rights (OHCHR) and the EHRC published the report of their joint investigation into human rights violations and abuses committed by all parties in the context of the Tigray conflict between November 3, 2020 and June 28, 2021. The report acknowledges it was not a comprehensive investigation and calls for further independent investigations and for accountability.

In June, the ACHPR launched a commission of inquiry into violations committed in Tigray. In response, Ethiopian authorities urged it to “immediately cease,” proposing a joint probe with the national EHRC instead, which the inquiry rejected citing concerns around independence.

Relations with Egypt and Sudan remained tense. Disputes between Ethiopia and Sudan over the contested territory of al-Fashaga increased, resulting in several open clashes.