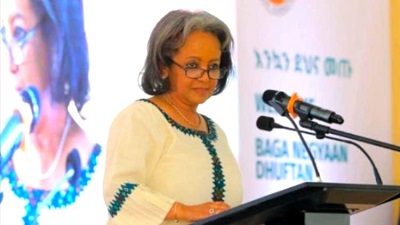 “I have signed the proclamation establishing the Ethiopian National Dialogue Commission pursuant to the constitution of the country. I believe in the significance of a genuine and inclusive dialogue. I have worked on such issue and witnessed its outcomes,” the President underlined.

“National Dialogue avoids imposition of thoughts, combative attitudes and security threats to the people and the nation at large. It cultivates culture of dialogue, listening, and mutual respect. National Dialogue is very essential to countries undergoing post-conflict circumstances like Ethiopia,” the President paraphrased.

“Women have to be nominated as candidates for commissioners of the National Dialogue Commission. The conflict particularly affected women. My contact to women sheltered in camps in Mekelle and Dessie justifies this fact,” the President stated.

The president further urged Ethiopians to nominate eligible women as candidates of commissioners of the National Dialogue. She also encouraged women to be elected and actively participate in the National dialogue process.