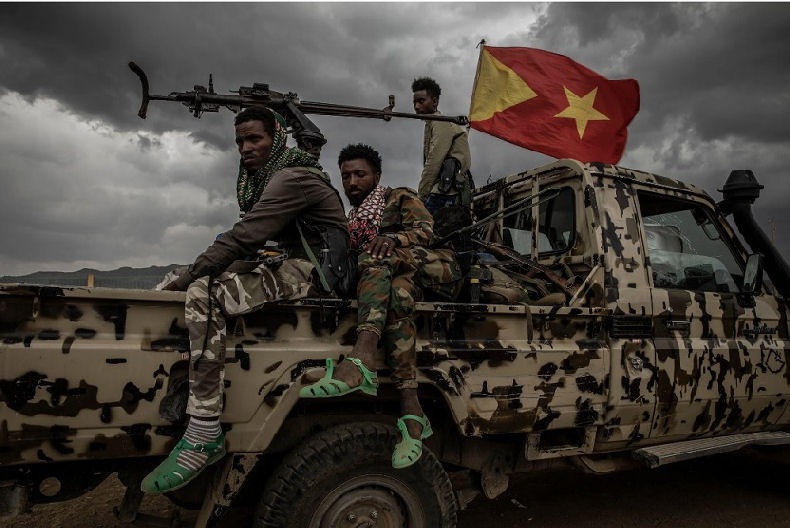 “In recent weeks, some of our warehouses have been looted and emptied by advancing T.P.L.F. troops, especially in Amhara,” said Mr. Jones, referring to the Tigray People’s Liberation Front. “I do believe T.P.L.F. has been very opportunistic.”

A spokesman for the T.P.L.F. denied the charge and blamed any looting on local groups and individuals in Amhara.

The remarks by Mr. Jones reflected a notable shift in tone from senior American officials after months of withering criticism of the behavior of Ethiopian forces and their allies inside Tigray, where a war that erupted in November has been accompanied by accusations of atrocities against civilians.

U.N. and other foreign officials have accused Ethiopian authorities of blocking vital supplies of food aid for Tigray at a time when American officials say that 900,000 Tigrayans face the prospect of a devastating famine in the coming months.

Samantha Power, who leads the USAID, last month accused the Ethiopian government of obstructing access to Tigray and said that humanitarian assistance to the northern region was “woefully insufficient.”

Soon, she added, aid workers would have nothing to distribute.

But the interview by her subordinate in Ethiopia this week conveyed a more conciliatory tone, one that suggested the Americans were reaching out to the Ethiopians, hoping to defuse the animosity.

While acknowledging “some strain and some stress” with the United States, Mr. Jones stressed his good relations with Ethiopian officials, called its government “one of our finest and most important partners,” and likened any tensions to a marital dispute.

“Sometimes, like in a good marriage, we have to say what we are feeling at that moment,” he said.

Those remarks drew an angry response from the T.P.L.F., highlighting the great difficulty in maintaining good relations with both sides in the Ethiopian conflict.

On Twitter, the main T.P.L.F. spokesman, Getachew Reda, lashed out at the American characterization of his fighters as opportunists, and blamed any looting in Amhara on local forces.

“While we cannot vouch for every unacceptable behavior of off-grid fighters in such matters, we have evidence that such looting is mainly orchestrated by local individuals & groups,” Mr. Reda wrote.

Amid the bickering, the war in Tigray is spreading and humanitarian needs are soaring.

The Ethiopian government says it needs help for 500,000 people in the Amhara and Afar regions, where fighting spread in July after Tigrayan fighters recaptured most of Tigray from government forces.
Editors’ Picks
Setting Sail on the Winding Waterways of California’s Delta
How the Clique Books Taught Me to Hate Other Girls and Myself
David Sedaris Shows Us How His Mind Works

But the crisis is most urgent in Tigray, where at least five million people need immediate assistance and about 900,000 face possible starvation, by the estimates of American officials.

After months of attacks on farmers, often by Ethiopian and allied forces, much of this year’s harvest has failed and aid workers have predicted a grinding famine starting this month.

But little aid is getting through.

On Aug. 25 the Ethiopian government said that 318 aid trucks had reached Tigray since July. But aid groups say at least 100 trucks need to make that trip every day to avoid a disaster.

On Tuesday the World Food Program warned that its stocks in Tigray were “running perilously low” although large amounts of aid were sitting in warehouses in neighboring Afar province, apparently awaiting Ethiopia permission to move.

“We have the teams here in Tigray ready to distribute it,” a World Food Program official said in a video posted to Twitter. “We just need the supplies coming in now.”