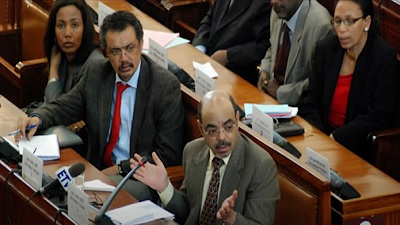 From his infamous “Pride” tweet last June to his shameless abandonment of impartiality for his office by making public comments on the Tigray conflict, it’s been painfully clear for a while whose side he’s on.

And when Ethiopia acted within its rights and complained, the chair of the WHO cut off its envoy’s speech and moved in record time to block an investigation request.

The West, of course, has been happy to keep backing Tedros and throw Ethiopia under the bus for its own foreign policies.

And yet the evidence has been out in the open all this time that Tedros will even sacrifice the safety of the world in terms of pandemics for the political agenda of the TPLF.

Let’s wind the clock back. Back when the TPLF were running Ethiopia, Meles Zenawi was keen to encourage closer ties with China, and things got so cozy that according to one scholarly journal article, by 2005, “China’s embassy in Addis Ababa hosted more high-level visits than any Western mission and Chinese companies had become a dominant force building highways and bridges, dams and power stations, cell phone networks, schools, and pharmaceutical factories. Ethiopia’s trade minister said that ‘China has become our most reliable partner.’”

Now let’s jump to the start of 2020. Tedros, the director-general of the World Health Organization, rushed to defend China even as 151 cases of Covid and one death were confirmed in 23 other countries. Nope, as far as Tedros was concerned, other countries shouldn’t close their borders to Beijing.

By February of 2020, the WHO’s responses to China under Tedros were so bizarrely inappropriate that even a major mainstream Western media outlet questioned what the hell was going on.

“Even as evidence mounted that Chinese officials had silenced whistleblowers and undercounted cases,” wrote Emily Rauhala, “Tedros took a moment to extol the leadership of Chinese President Xi Jinping.”

As Rauhala pointed out, in the aftermath of the SARS epidemic of 2002–2004, “updated rules required the WHO to report emerging diseases and gave it broader power to investigate threats using nonstate sources of information such as civil society groups. One of the goals: preventing coverups.”

But instead of acting within the world’s best interests, Tedros was content to celebrate China’s handling of Covid and give them a pass.

In fact, the WHO refused to even declare a pandemic until March 11, 2020 — after Covid had spread to 114 countries.

It was around this time that Tedros and his allies in the WHO began to sing a completely different tune over China.

The Tigray situation changed. Militarily, the TPLF were getting their asses kicked with only isolated fighting incidents reported and Mekelle occupied. Only a week before the WHO finally declared a pandemic, the UN Security Council met over Tigray, but Russia and China put up road blocks over a drafted joint statement.

Suddenly, China was no longer Tedros’s bosom buddy. Months after praising China’s handling of Covid, Tedros chose to give a public tongue-lashing over lack of access for the WHO’s investigative team in Wuhan. And once again — because most of the mainstream media suffers from goldfish memory — it was left to the Washington Post’s Emily Rauhala, who knows China well, to notice something was seriously off.

She wrote that Tedros made “the most pointed comments to date from an agency that has been solicitous toward China through most of the pandemic.” She also noted that the WHO’s report “appears to take assurances from staff members at the [Wuhan] lab at face value.”

Even Geoffrey York — who has since evolved into the TPLF’s best Canadian propagandist at the Globe and Mail — saw fit to write a critical if lazy profile of Tedros a month later. York, the Globe’s Africa Bureau Chief, didn’t notice either what’s been staring all of us in the face for months.

Tedros was playing a game of “proportional response.” You won’t support the TPLF publicly, okay, we’ll rap your knuckles publicly.

For those who want to jeer and say, “conspiracy theory,” again, this is a guy who has made his sympathies for the TPLF public and for all to see while holding one of the most important jobs at the United Nations.

And how many millions died because this man put the political and military goals of his cronies ahead of global health concerns? How many could have been saved had he done his job properly instead of acted out of self-interest?

Something else to consider: the strategic leadership of the World Health Organization essentially supports the use of child soldiers. Think about that for a moment.

None of this is yesterday’s news. It’s still of vital concern to many medical professionals in different countries. In an open letter dated January 25 to the WHO’s board of executive officers and the director-general for Kenya’s Ministry of Health, a collection of academic and medical associations called for the removal of Tedros.

“Dr. Tedros’s partisan press releases, his media interviews, and social media posts all go against the regulations of the WHO and constitute a violation of the WHO’s ethics guidelines,” reads the letter in part. “His social media posts, for example, are so blatantly one-sided that the line between his private view and WHO’s position is blurred. A cursory look at his official Twitter account reveals the extent to which he would go to highlight the harm and destruction in Tigray region while completely ignoring the destruction in the Afar and Amhara regions. He has abused his position as head of WHO to advance a political agenda.”

Aside from the fact that Tedros has no medical degree yet runs the WHO, virologist Tilahun Yilma — who does have impeccable credentials as a distinguished professor emeritus at the University of California — told Daniel Belayneh on Arts TV’s Horn of Africa Digest, “To me, he’s totally unfit. Ethically, professionally and competency-wise as well.”

Alan Whiteside, an expert in global health policy, argued on the same program, “The problem is that Tedros is an authoritarian politician and a bureaucrat. He wasn’t great in the non-pandemic period of leading the WHO, and I’m afraid he’s terrible with regards to Covid.”

Whiteside pointed out that Tedros has kept his focus on Tigray while he might have shown interest in other conflicts such as the political situation in Myanmar or the rising tensions in Ukraine.

But he hasn’t. And he won’t. Because for Tedros, only one part of the world matters.

None of this — the blatant partisanship, the incompetence, the lack of transparency — has made a dent on the thinking of the WHO’s own board, and as Al Jazeera put it, “nearly all of the board’s 34 members, representing countries from around the world, threw their weight behind him.”

If only they knew Tedros the way Ethiopians do…

Anyone looking hard into Tedros’ record as a former Minister of Health for Ethiopia and as a public health official will encounter a chamber of horrors. Not that he ever did gruesome experiments like Josef Mengele, but he was a high-ranking member of the TPLF, an organization that gets about as close as you can think of to an African version of Nazis — those who declared Amhara as their enemy right in their founding manifesto and who ludicrously believe (like Nazis) that their ethnicity created a bunch of supermen who inspired other cultures. And there are enough scandals in his past that yes, Tedros can justifiably be called Ethiopia’s Mengele.

The really scary thing is that critics tried to warn the world back in 2017. Here are just a few highlights:

Accusations persist — with zero effort by Western media or political bodies to investigate — that on Tedros’s watch, scores of Amhara women and girls were given injected contraceptives and sterilization without their knowledge, let alone informed consent. In fact, the decline in the Amhara population for those years — with millions disappearing from census rolls — is one of the worst kept secrets in Ethiopia. At the same time, while Tigray excelled in getting quality neonatal care, the Amhara region led in perinatal, neonatal, infant and toddler mortality rates over a course of 16 years.

It’s virtually impossible for all of that to medically happen except through design.

As for Tedros, no one in the West, it seems, ever heeded the call that this incompetent and corrupt official should not be handed so vital a position as director general of the World Health Organization.

They might have examined how he served as chair of the Global Fund to Fight AIDS, Tuberculosis and Malaria from 2009 to 2011. According to an audit report by the fund’s Office of the Inspector General, Tedros and his pals misused more than $7 million, and it would have liked very much please to get its money back. If we translate the polite language of the report, the auditors found lousy accounting, slipshod budgeting and monitoring, and barely anyone keeping track of where the money went.

Just as money could suddenly disappear, Tedros could make entire diseases disappear. In 2006 while he was in charge, the federal Ministry of Health preferred to call cholera “Acute Watery Diarrhea” when it hit the Amhara region and killed about 200 people. The next year, Tedros’s health ministry refused to declare a state of emergency despite the UN warning there was a cholera epidemic, which had already taken more than 680 lives. In 2009, the death toll was even higher from cholera at more than 700 people in five regions.

Failing to respond properly to epidemics. Doing the politically convenient thing instead of the medically urgent thing… Cholera… Covid. Notice a pattern?

And yet Tedros is still backed as the guy who should be minding global health under the UN’s mandate.

It’s no accident either that the creepy rag run by the Fungus on Ethiopian Current Affairs, William Davison — who’s made little effort to disguise his conflict of interest as a senior analyst for Crisis Group while playing publisher, and while supporting the “Tigray genocide” narrative — ran a less than convincing defense of Tedros when the criticisms intensified in the summer of 2020.

We haven’t even discussed Tedros’s tenure as Minister of Foreign Affairs, serving a regime that placed centers for torturing political dissidents right in the heart of Ethiopia’s capital.

But his career in public health is frightening enough.

Tedros is not a doctor. Yet surely one of the Hippocratic maxims — “Do No Harm” — must be a guideline for the crucial job of leading the WHO.

The harm that Tedros continues to inflict not only on Ethiopia but on an unsuspecting world needs to stop, while Tedros himself should move from his office in Geneva to a jail cell outside Addis Ababa.